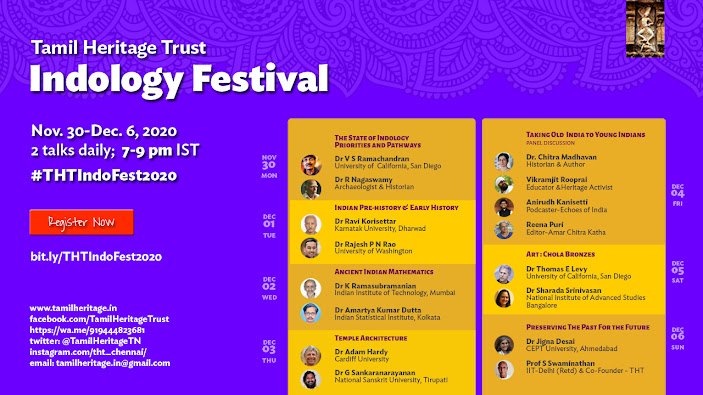 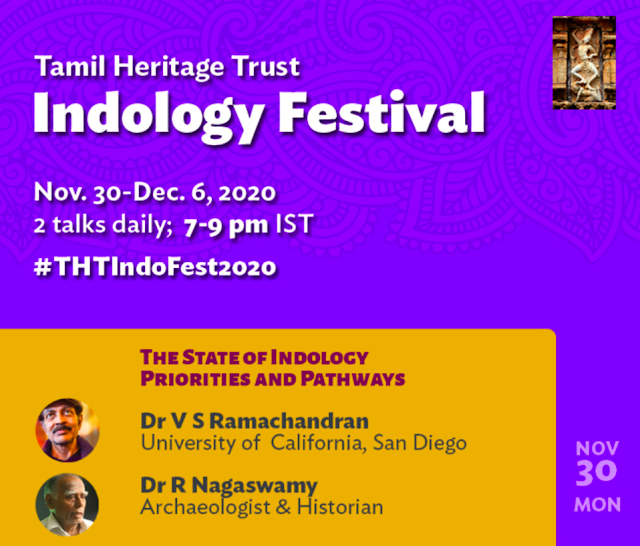 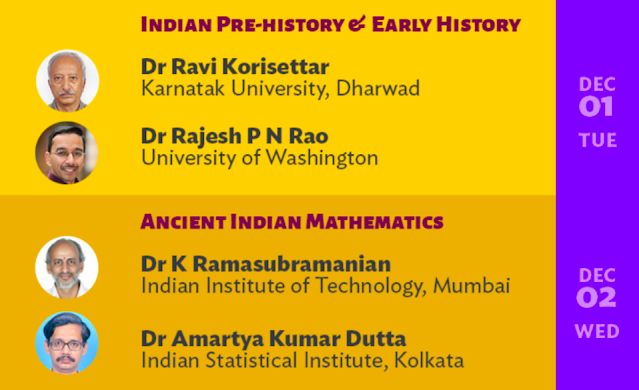 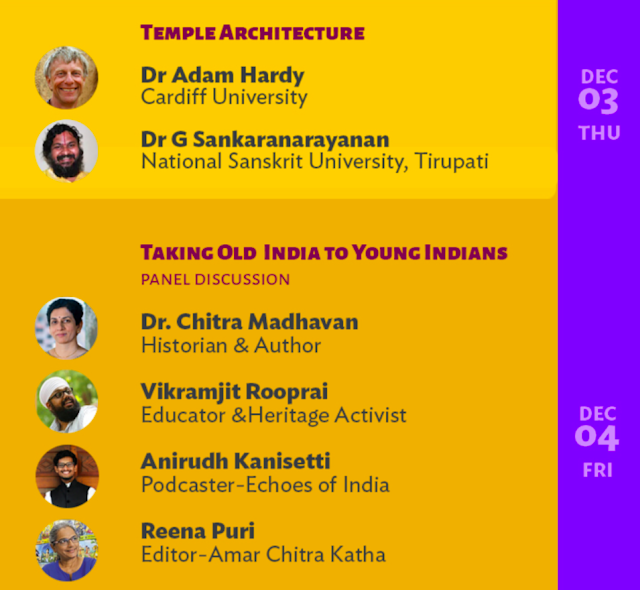 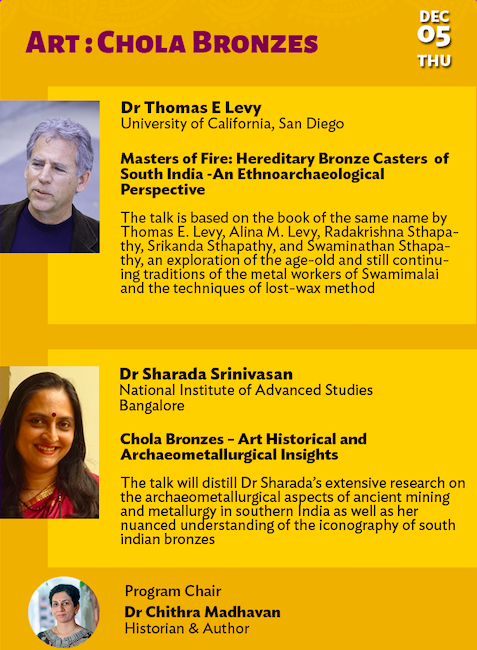 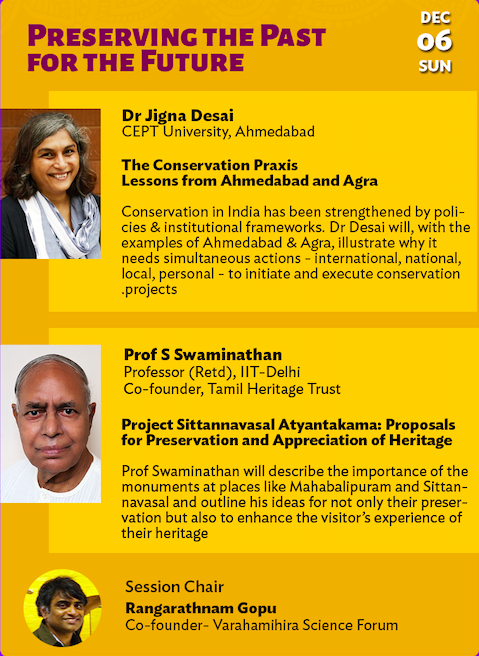 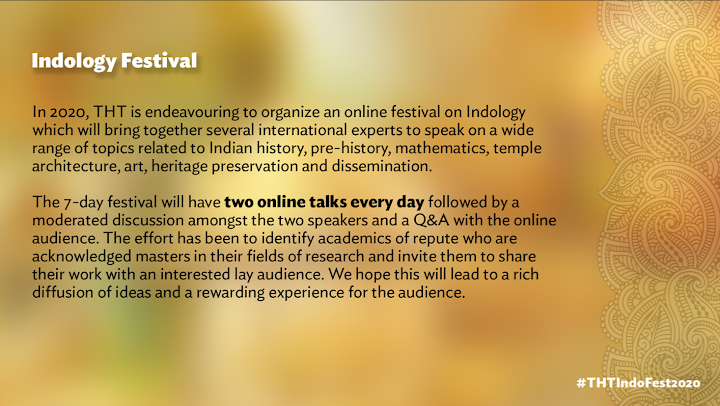 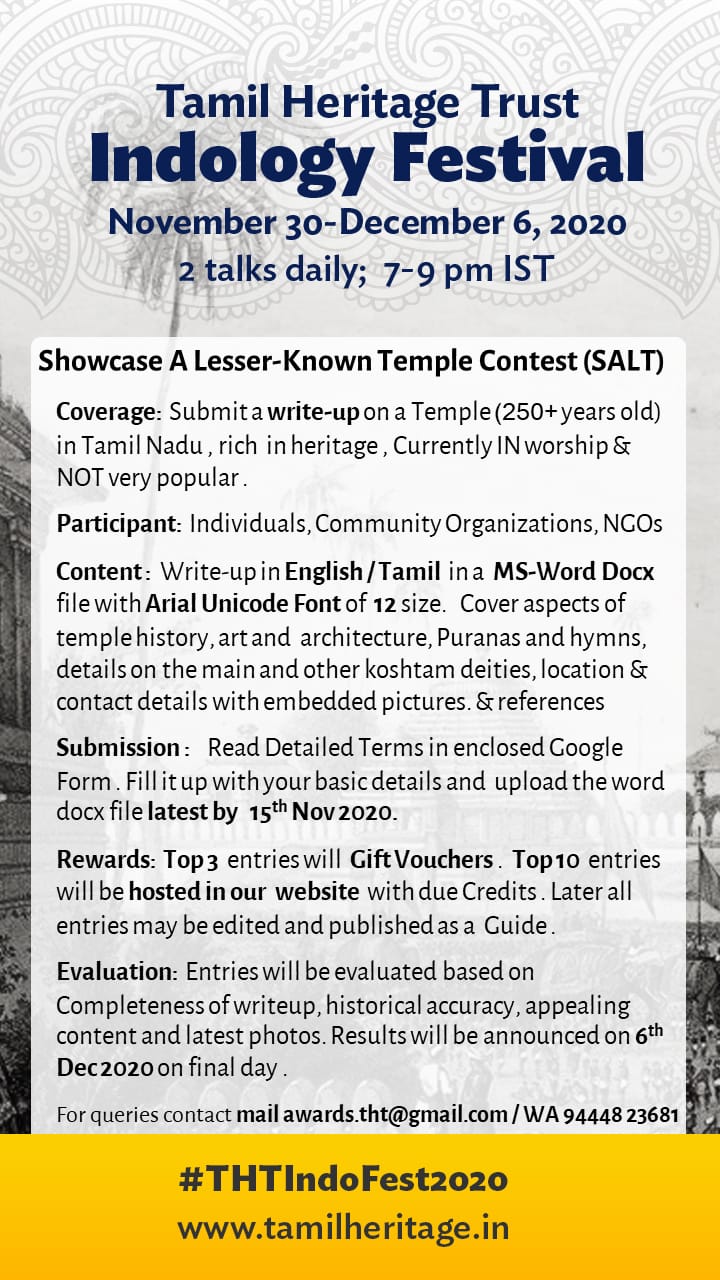 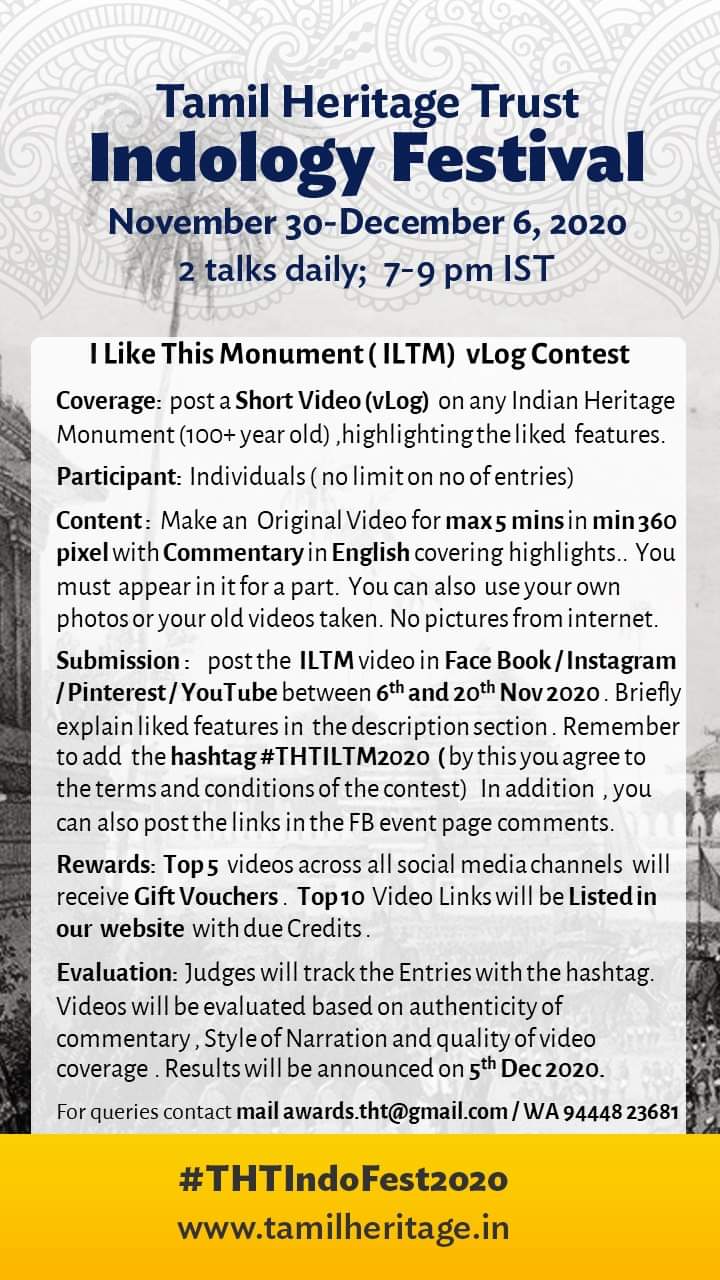 THT I Like This Monument ( ILTM)  vLog Contest 2020
THT IndoFest 2020 - 30th Nov to 6th December related initiative
Post a Short Video (vLog) on any Indian Heritage Monument (100+ year old), highlighting the liked  features in Social Media Channels with hashtag #THTILTMW2020.  Spread the Heritage awareness and win recognition and prizes too.
You can also optionally add Links of the Posts in the comments section of this FB event
https://www.facebook.com/events/356090212310687 Prof V.S. Ramachandran is Director of the Center for Brain and Cognition and Distinguished Professor with the Psychology Department and Neurosciences Program at the University of California, San Diego, and Adjunct Professor of Biology at the Salk Institute. Ramachandran initially trained as a doctor (MBBS) at Stanley Medical College, Madras, India, and subsequently obtained a Ph.D. from Trinity College at the University of Cambridge. After that, he received an honorary FRCP; London (Fellow of the Royal College of Physicians) and two honorary doctorates (DSc; honoris causa). Ramachandran’s early work was on visual perception but he is best known for his experiments in behavioral neurology which, despite their apparent simplicity, have had a profound impact on the way we think about the brain. He has been called “The Marco Polo of neuroscience” by Richard Dawkins and “The modern Paul Broca” by Eric Kandel.

In 2005 he was awarded the Henry Dale Medal and elected to an honorary life membership by the Royal Instituion of Great Britain, where he also gave a Friday evening discourse (joining the ranks of Michael Faraday, Thomas Huxley, Humphry Davy, and dozens of Nobel Laureates). His other honours and awards include fellowships from All Souls College, Oxford, and from Stanford University (Hilgard Visiting Professor); the Presidential Lecture Award from the American Academy of Neurology, two honorary doctorates, the annual Ramon Y Cajal award from the International Neuropsychiatry Society, and the Ariens-Kappers medal from the Royal Netherlands Academy of Sciences. In 2003 he gave the annual BBC Reith lectures and was the first physician/psychologist to give the lectures since they were begun by Bertrand Russel in 1949. In 1995 he gave the Decade of the Brain lecture at the 25th annual (Silver Jubilee) meeting of the Society for Neuroscience. In 2010 he delivered the annual Jawaharlal Nehru memorial lecture in New Delhi, India.

The President of India has conferred on him the second highest civilian award and honorific title in India, the Padma Bhushan.

And TIME magazine named him on their list of the 100 most influential people in the world.

Ramachandran has published over 180 papers in scientific journals (including five invited review articles in the Scientific American). He is author of the acclaimed book “Phantoms in the Brain” that has been translated into nine languages and formed the basis for a two part series on Channel Four TV (UK) and a 1 hour PBS special in USA. NEWSWEEK magazine has named him a member of “The Century Club” – one of the “hundred most prominent people to watch in the next century.” He has been profiled in the New Yorker Magazine and appeared on the Charlie Rose Show. His new book, "The Tell Tale Brain" was on the New York Times best-seller list.

Ramachandran has a deep interest in history and archaeology.

Geographical and Prehistoric Cultural Subdivisions of the Indian Subcontinent

The presentation traces the history of  human settlements across the Indian subcontinent since the Lower Paleolithic times to the end of Neolithic-Iron Age time periods. Archaeological investigations spread over a span of 160 years have shown that prehistoric cultural evolution across the Indian subcontinent was not uniform in time and space. Distinctive cultural provinces are associated with a network of geographical environments which in turn are governed by the variation in the intensity of monsoon precipitation/rainfall  across the subcontinent.

The focus of the presentation is on spatio-temporal variation in the way human settlements/early cultures have developed set in a geographical and environmental perspective. The last two decades have witnessed landmark archaeological investigations relating to the absolute chronology of Palaeolithic cultures, understanding  of man-land relationships and identification of indigenous development of early food producing way of life across the Indian subcontinent. Based on archaeobotanical and archaeozoological findings domesticated plants and animals   native to India and exotic crops from Africa, Southwest Asia and East Asia have been documented.

The Script of the Indus Valley Civilization: Computational Analysis and Recent Interpretations

More than 4000 years ago, people living in the Indus valley in what is now Pakistan and northwestern India wrote short sequences of symbols on seals, tablets, pottery, and other artifacts. These short texts constitute the Indus script, one of the last major undeciphered scripts of the ancient world. Deciphering the Indus script could have significant ramifications for the way we view the pre-history of the Indian subcontinent today.

In this talk, I will first describe research aimed at analyzing the Indus script using computational and statistical techniques. This analysis provides insights into the syntax of the script and allows a comparison with other scripts encoding natural languages. Such an analysis however does not address the issue of interpreting the symbols (the semantics of the script).

The second part of the talk will focus on how the constraints imposed by syntax and artifact use could suggest possible interpretations. We first discuss competing interpretations for the class of "fish" symbols in the script. We then explore the potentially provocative hypothesis that rather than simply indicating names and ownership of property as traditionally believed, Indus seals may have been an integral part of a pre-coinage system for economic transactions, allowing rapid generation of tokens, tablets and sealings to facilitate exchange of canonical amounts of goods, grains, animals, and labor.

The Magnificence of Brahmagupta’s Bhavana

In mathematics, a law of composition combines (i.e., \composes") two mathematical objects of a certain type to produce a third object of the same type. For instance, it may combine two solutions of a given equation to generate a third solution of the equation, or to combine two expressions of a particular form to yield another expression of the same form. The principle of composition lies at the heart of modern (abstract) algebra and number theory.

A great contribution of Brahmagupta (628 CE) is his introduction of the very idea of composition in early seventh century, through his result which is known by the Sanskrit name bhavana. In this talk we will try to give a historical perspective to help us appreciate the magnicence of Brahmagupta's composition law bhavana.

Brahmagupta's statement is equivalent to an important identity in algebra and number theory. But the presentation of his actual statement as a mere identity, as is often done by mathematicians, misses its real mathematical signicance. We shall discuss this caveat.

Brahmagupta's law is formulated as a principle of composition of solutions of a quadratic equation of the form Nx2+z = y2, where N is a fixed constant. We will present a few ancient and modern applications of his rule.

This talk is about the tradition of temple architecture that predominated across the whole of northern India between the 6th and 12th centuries, continuing with periodical revivals until today. Rather than dwell on particular monuments, I shall try to put across an understanding of the architecture and its principles, in particular a sense of how it was created.

These are the main areas and themes of the talk:

·       The importance of typology, as an architectural principle, not merely for classification. Timber origins of early types. Aedicularity: temple composed of temples.

·       The architectural expression of downward an outward movement (emergence, expansion, proliferation); how this is paralleled by an emanatory pattern of development within the tradition, as the architects draw out one form from another; and how this pattern reflects perennial concepts of cosmogony and manifestation.

Theory and practice: the canonical Sanskrit texts (Vastushastras, Shilpashastras), and how temple designs ‘unfold’ in these texts. I shall focus on an important chapter of the 12th-century Aparjitaprccha, and show a worked example of how to proceed from the text to a temple design.

South Indian Temple Architecture: An Overview and a Comparison

South Indian temples can be largely grouped under four sub-groups: Tamil Nadu, Karnataka, Kerala and a Andhra/Odisha one. While the first three are distinct, the Andhra temples display a mix of features from Tamil Nadu, Karnataka and Odisha. Odisha temples have a mix of North and South Indian features. This talk will explore the temples across these regions and present the commonalities and differences across these geographical regions.

The talk is based on the book of the same name by Thomas E. Levy, Alina M. Levy, Radakrishna Sthapathy, Srikanda Sthapathy, and Swaminathan Sthapathy, an exploration of the age-old and still continuing traditions of the metal workers of Swamimalai and the techniques of lost-wax method.

The Talk will distill Dr Sharada’s extensive research on the archaeometallurgical aspects of ancient mining and metallurgy in southern India as well as her nuanced understanding of the iconography of south Indian bronzes.

Sunday, Dec 6th : Preserving the past for the Future

The Conservation Praxis, Lessons from Ahmedabad and Agra

Conservation in India is legally embedded through the actions of the Archeological Survey of India and has recently been strengthened through many new policies and institutional frameworks. In practice many organisations and individual citizens persevere to ensure its success. This talk would, through examples of Ahmedabad and Agra, illustrate the need for many simultaneous actions (international, national, local, personal) in order to initiate and execute the concern of preserving the past for the future.

Sunday, Dec 6th : Preserving the past for the Future

Project Sittannavasal Atyantakama: Proposals for Preservation and Appreciation of Heritage

Prof Swaminathan will describe the importance of the monuments at places like Mahabalipuram and Sittannavasal and outline his ideas for not only their preservation but also to enhance the visitor’s experience of their heritage.

Invites you to a Digital Talk on

Please register for the talk here

The Bhakti movement is the child of the Dravida desa, especially the Tamil land and language. Women saint poets from Tamil Nadu have had a deep nexus with both the ethos of bhakti as well as its devotional poetics as reflected in their poetic corpus.  Two Tamil women poets of the bhakti movement remain deeply etched in our memory for their sterling contributions to devotional poetics.  Karaikkal Ammai and Andal are towering figures both for their bhakti rasa and for their poetic excellence. One is a Saiva poet of the sixth century, while the other is a Vaishnava poet of the 9th century. Separated though by three centuries, and religious sub sects, these two women weave exquisite garlands of devotional verse that engross both  the connoisseurs of poetry and the bhaktas alike, with a powerful simultaneity.

This talk would compare the two poetic jewels of the Tamil land and analyse their divergent, yet converging patterns of bhakti and surrender, that have enriched the fine tapestry of Tamil, nay, Indian devotional aesthetics.

Prof. Sarada Thallam teaches in the department of English at Sri Venkateswara University, Tirupati. With over 25 years of teaching experience. She has to her credit several published works including a book on African American Women Playwrights, and Rajam Krishnan’s Indian Feminist Hermeneutics. She has published research papers and book chapters in the domains of contemporary literary studies and classical literature. She has presented research papers in many conferences within and outside India. Besides, she has given numerous talks on multiple aspects of literature and culture.

A post-graduate in English Literature from the Madras University, Sarada later did her doctorate from the University of Hyderabad.

A former Fulbright Fellow at the University of Wisconsin-Madison, she has visited the universities of Oxford, Georgia and Emory on academic schedules. 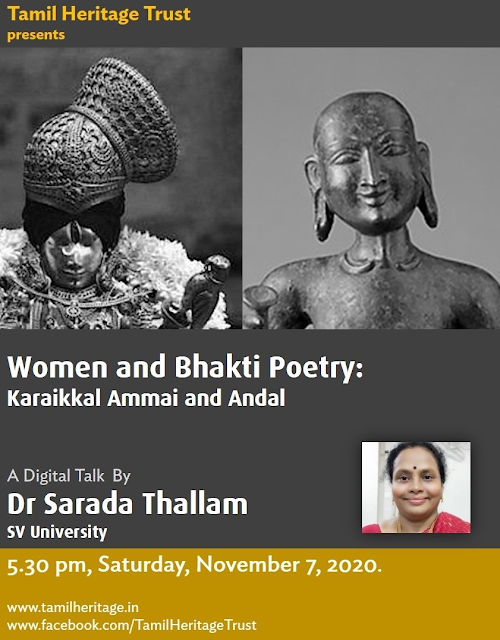