Dr M S Krishna Murthy, former Professor and Chairman, Ancient History and Archaeology, University of Mysore, talks about some of the intriguing architectural forms found in the temples of Karnataka. These include vastu mandalas and vastu kumbhas, suspension roofs, Vrittaya shikaras, rare forms of Buddhist chaityas and many more. About Dr M S Krishna Murthy Dr Krishna Murthy, popularly known as Prof MSK, specialises in Indian Temple Architecture and Sculpture, Epigraphical studies and archaeological excavations of the early and medieval periods. He has written ten books, authored over a hundred scholarly papers and has been a guide for several PhD students. He has made numerous signal contributions to the field, especially in the excavation and interpretation of the site of Talakad. He has been instrumental in the discovery of many archaeological sites, artefacts and inscriptions which have led to the subsequent study and better understanding of the history of the region. Prof MSK serves on several academic Boards and Councils. www.tamilheritage.in www.facebook.com/TamilHeritageTrust 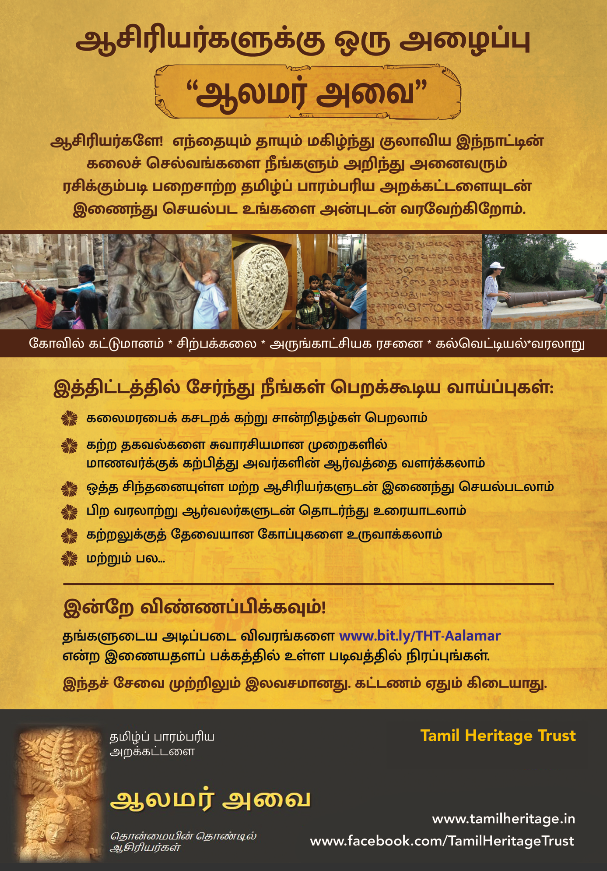 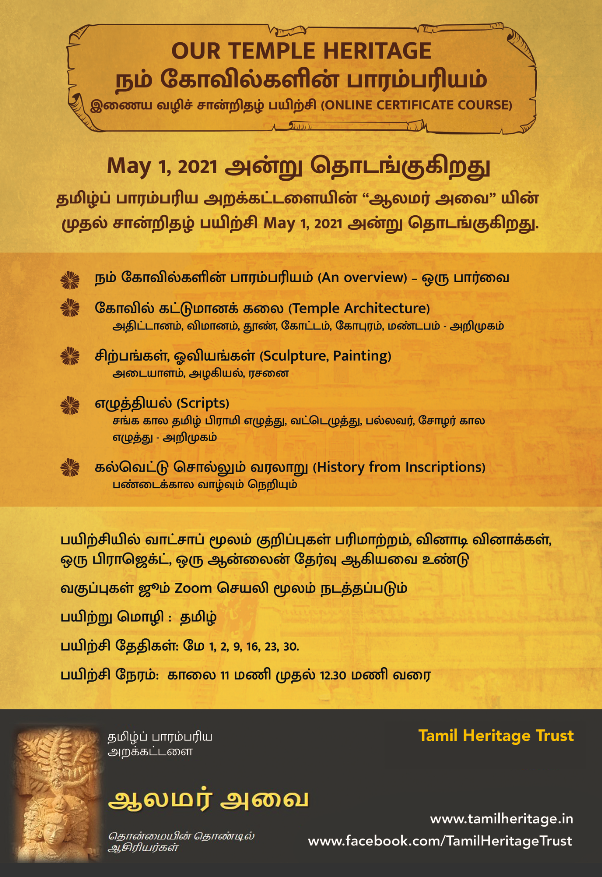 THT will conduct short online training programs on How to See a Temple, and appreciate the Architecture, Sculptures, Paintings , Ancient scripts , Inscriptions and fine arts. These will be conducted on 4-5 weekends followed by interactions thru Whastapp during the week. Each course will have a project for the participant and an on-line exam. On clearing the course requirements, the participant will be awarded a Heritage Certificate by THT.

If a member teacher wants THT to conduct a program in their school, THT will try to support such an initiative by identifying appropriate resources like presentation materials, contact details of appropriate resource persons etc., to assist them in conducting programs for their students.

11. Will THT approach my school / college for anything connected with Aalamar Avai?

Aalamar Avai is a program to support and encourage individual teachers who want to spread awareness about heritage related matters. It is entirely voluntary on the part of the teacher. THT will not directly approach the school or college of the teacher for any heritage-related activities.

12. How much time will I be expected to spend on Aalamar Avai activities?

There are two sets of activities:

Please fill in the online Registration Form at www.bit.ly/THT-Aalamar with some details about yourself, your school or college, and a few questions on your Heritage Interests to shortlist suitable aspirants. Selected Teachers will be intimated and will start the programs including training programs.

14. What infrastructure is required for making the best of the membership of this program?

15. What does Aalamar Avai mean?