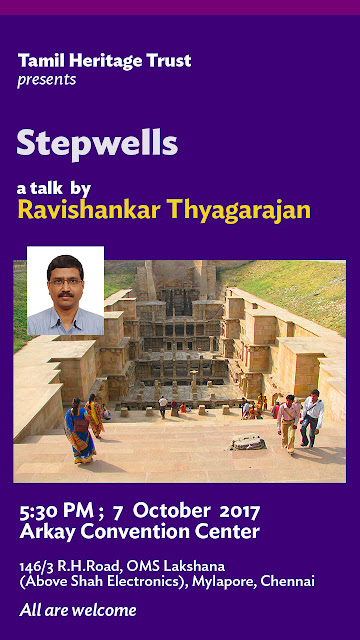 Stepwells are large and steep wells with steps leading to the water, built mostly in the dry states of Gujarat, Rajasthan and regions around Delhi. Though there were stepwell constructions prior to 10th century, after this period, the constructions became large and more ornate, of a quality comparable to the greatest temples of India. One such standout stepwell is Rani ki Vav built by King Bhimdev I of the Solanki dynasty in the 11th century at Patan. The stepwell construction continued during the Islamic rule as well, in the 13th-16th century period.


The talk will introduce stepwells in general, and describe in more detail two important stepwells of Gujarat, Rani ki Vav mentioned above and the 15th century stepwell Adalaj near Ahmedabad.

About the speaker:
​
Ravishankar Thyagarajan is a heritage enthusiast, who works in a leading Financial institution in Chennai. His interests range from Puranas to syncretic traditions of India. He has given talks on U Ve Sa, Inscriptions of Chalukyas of Badami, Jain sculptures of Kalugumalai & Islamic Architecture of India.

Entry for the event is absolutely FREE; No registration required. The event will also be available on LIVE.