Questions and Answers after the talk:
1. Shilpa S Wadekar: Any yantra followed for building hoysala temples?
As far as my knowledge goes there was no such thing as the Hoysalas also followed the same Āgamas and Vāstugranthas as the other builders. After the selection of the ground for temple building during the laying if garbhanyasa certain line were drawn and deities were invoked. This cannot be considered as a yantra.
2. Jayen Mistry: Are the sculptures presented in a predetermined order or randomly placed?
The decorative sculptures on the outer wall are randomly placed and the narrative panels had to have a sequence. Only the votive sculptures were enshrined with norms.
3. VK Srinivasan: Are there any examples of Hoysala architecture with varying heights of Kutas in Trikuta or Chatushkuta or Panchakuta design? Are they necessarily to be of same height?
There are solitary examples of catuṣkūṭa and pañcakūṭa were the prāsādas are equal in height. In the original trikūtas the prāsādas are of same height. In those which have lost their original prāsādas and replaced by later ones all kinds of variations can be noticed.
4. vaijayanthi chakravarthy: ​Would like to have the quote the speaker gave on the stamba panjara!
Nāndi ślōka from Baana's Harshacharita and also found as invocatory verse inkalyanachalukya and Hoysala inscriptions.
5. Sripadma Ganapathi: ​There are also many repetitions of Narasimha ripping off the intestines of Hiranyakaship. Is there any specific reason why?
That is one of the four major forms of Narasimha i.e. Ugra Narasimha the other three being Yoga Narasimha, Laksmi Narasimha and kevala Narasimha.
6. Ravikumar Palaniappan: ​Are Madanika in prastara are found in Ajanta also?
These sculptures are discernible from Sanchi stupa period itself.
7. Ravi Shankarnarayana: What would be the resources required to build a belur/halebeedu temple today?
Some financial expert has to judge this.
8. Prathik Murali: ​Devakhullakas are 2 types as we see in the slide. One is attached to the bhitti another which is seperate. Can the one attached to the bhitti called as a Khanda Harmya ?
Yes, it can be called so.
9. Prathik Murali: ​That is an interesting hypothesis for the etymology of Srikara; but brahmi had already gone out of vogue for centuries during Hoysalas. How is it possible to account for it ?
Do observe some Hoysala inscriptions were Sri is written.
10. Ramjee Nagarajan: ​Any research on the Corn like structure in Hoysala sculptures before they were actually brought or introduced into India?
This is usually identified as the Beejapura or Maathalunga fruit. Some form of corn seem to have been indigenous as a similar form is found in the Vishnu sculpture at Badami cave number 3.
11. vaijayanthi chakravarthy: ​Did he say that following Pancharatra agama or the samhitas he mentioned later were the influencers in terms of the only Vishnu murti in Vaishnava temples?
Not necessarily they have influenced on rituals also.
12. Sashi Kolar: Any idea where the terms urdhva and ado jangha were sourced from? No other
temple architecture uses such a division of the bitti despite him claiming that
Vijayanagara gopurams do), and I hear the Karnata Dravida texts no longer survive. Is it true?
This term can be found in the encyclopedia of Indian temple architecture volumes.
I don’t think there were any sect of texts classified as Karnata Dravida.

A digital talk by

Kindly register for the talk here

Contributions of  the Hoysalas to the field of south Indian temple architecture is not something unknown to the connoisseurs of  Indian heritage. These monuments are known for their elegance with crisp and intricate carvings. Hoysalas constructed innumerable temples but not of mammoth proportions. They embellished their temples with various sculptures. This became the identity of Hoysala temples. Many of the Hoysala temples are world heritage monuments today and are yet to be followed by many more for this recognition.

Popular features of Hoysala temples known amongst both the lay men as well as the scholars are that these temples possess stellite plan, built of soap stone and intricately carved. Though these are established facts, but they cannot be unanimously applied to Hoysala monuments. Some fall under this category but there are many examples which are exceptions for these norms. This paper concentrates on explaining the Hoysala temples with the mention of these exceptional observations.

A researcher on temple architecture, Dr. Manoj Gundanna is an Archeologist by profession. He earned his MA and PhD degrees in Ancient History  and Archeology from Manasa Gangotri, University of Mysore. Currently a Research Associate with Maharani Lakshmi Ammani Research Foundation, Bangalore, Dr. Manoj is also a resource person with the Archeological Survey of India. His doctoral research was titled “Temples of Salem Region”. He was awarded with the PhD. in 2009. His doctoral work is being published by Bharathiya Kala Prakashan, Delhi under the title “Temple Architecture of South India (Salem Region)”

Dr. Manoj’s research work focuses on the study of ancient Dravidian temple architecture based on traditional agamas and vastugranthas besides the study of sculptures and iconography based on ancient Sanskrit texts. He has presented more than 50 research papers both in English and Kannada at various seminars and symposia. He has delivered lectures on Archeology, Music and Mythology in various institutions, religious organizations and to students of the Universities of Guelph, Mt Allison, and Concordia besides various universities and colleges of Karnataka. One of his books, Devalaya Vastu Vignana, is a reference book on Dravidian temple architecture for post- graduate students of History and Archaeology.

Dr. Manoj’s interests include Kannada and Sanskrit literature, Inscription and Manuscripts.   A multi linguist, he has several compositions in Sanskrit, Kannada, Telugu and Tamil to his credit. Planet Prayers, a trilingual commentary on navagrahskrithis of Muthuswami Dikshitar and Siddhi Vinayakam Sada Bhajeham, an exposition in English on Muthuswami Dikshitar krithis on Mahaganapathy are among his well-acclaimed books. 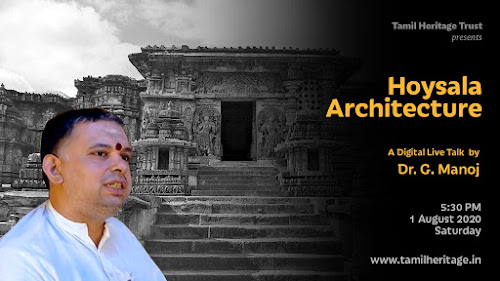