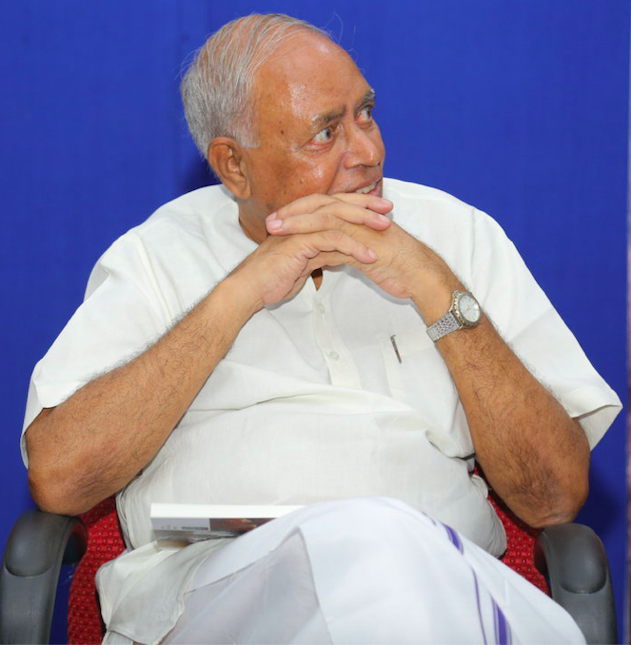 The time has come, the Walrus said, to talk of many things
Of shoes and ships and sealing wax and cabbages and kings.
-   from The Walrus and the Carpenter, by Lewis Carroll

Unlike the walrus, few people can talk of such a variety of things.  Prof Swaminathan can talk of shoes and socks in Ajanta paintings, ships that sailed between England and India, the Fibonacci patterns of leaves in cabbages, and many a king including Mahendra Varma Pallava, - the maverick who called himself Vichitra-Chitta, the innovative and exotic thinker who unleashed the era of sculptures and architecture in Tamil country. If you had studied mechanical engineering in IIT Delhi, I am sure you would have heard him speak about sealing wax, too.

To talk about such a variety of things, one must first have an abundant curiosity and the intellectual discipline to understand what they have to offer. In short he must be an Atyanta-Kaama and a Tattva-Vedi.

Our Vichitra-Chittha Swaminathan can not only talk about them, but talk about them in interesting ways, and provoke the listener’s curiosity and instigate a sense of wonder.

Most Indians, unlike Isaac Newton, stand not on the shoulders of giants, but are surrounded by the wonders wrought upon this many splendored land by innumerable generations of intellectual, artistic and indefatigable. Sadly most of us see this treasure trove not with eyes always appreciative but sometimes ignorant, often apathetic, even blasé. Even the curious and the restless among us, often need a spark, a shaft of light, a steady lamp to look long and deep and absorb the essence of such wonders, waiting to be discovered. Such a spark, a lighthouse is Swaminathan.

Professor Swaminathan had a thriving career as a faculty member in IIT Delhi, a premier engineering institution in India.  He sought voluntary retirement, first to work in the Integrated Rural Technology Centre in Kerala and then moved full time into Culture and Heritage.  He first established Sudarsanam in Pudukkottai to document the heritage of Pudukkottai, his hometown.  Subsequently, he was instrumental in establishing the Tamil Heritage Trust in Chennai and remains its chairman.
Newer Post Older Post Home