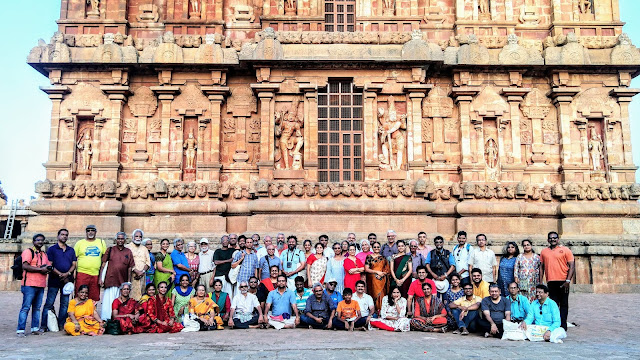 A site seminar for art enthusiasts, that is a structured visit to a set of historical monuments, is something like a factory visit for engineering students. It comprises an introduction to the history, preparatory lectures by experts, guided visits, artistic performances, sessions for feedback and free exchange of opinions.
As an experiment, a two day Mahendra Pallava tour was organized in 2009, a tour of the several cave temples of the original Vichitrachitta. In June that year, Prof. Swaminathan decided we could do an proper Site Seminar in Mamallapuram, and invited a few people – Badri Seshadri, R Chandrasekar, and V Chandrasekar - to help organize it. The preparatory programs were then launched in September, with his two hour detailed lecture. He also arranged for a few other speakers to talk about related aspects – a documentary screening by Balakailasam on idol making, an in-depth presentation by Prof Sivaramakrishnan on the the language of sculptures using the miniature sculptures at Pullamangai and Nagesvaram. Swaminathan himself also gave an indepth illustrated lecture on the four major narrative panels. For the actual Site Seminar, Prof Baluswamy who had written a book on the Great penance, Prof Sivaramakrishnan, and Umapathy and Veezhinathan Acharyas, hereditary sthapathis were also invited. With a few additional preparatory lectures, about Pallava history, iconography, the Grantha script etc we went to Mamallapuram quite prepared. A subset of the participants also prepared a street play, partly based on a one-act Sanskrit play called Trivikrama, suspected to be written by Mahendra Pallava himself.
The first site seminar was quite a success, but it did not have the after effect that Swaminathan hoped for. Individually, the participants were quite thrilled and several visited Mallai in the subsequent months, but a larger movement to create greater awareness didn’t materialize in the short term. As with all things Indian, it needed the slow churn of time. The Site Seminar experiment almost ended with Mamallapuram, but he was persuaded by an eager Narayanaswamy to organize a second site seminar at Ajanta. This time, the groundworks began with a sweeping historical and artistic overview of Ajanta art and an in depth look at Mahajanaka Jataka. In the subsequent weeks, each individual participant chose or was assinged some painting or feature of Ajanta to study and present. The presentations varied in quality, duration coverage and confidence, but nevertheless they were covered.
That set the tone for all future site seminars, and Eleven Site Seminars have been completed, including: Pudukottai, Srirangam, Gujarat, ThenPandi Naadu, Badami-Pattadakkal, Orissa, Kanchipuram, Madhya Pradesh, and Kumbakonam (Chola Heritage). Like a snowball, the series has collected talented, dedicated, scholarly and cooperative people, full of ideas, energy and enthusiasm, which have made THT a richer, effective organization.