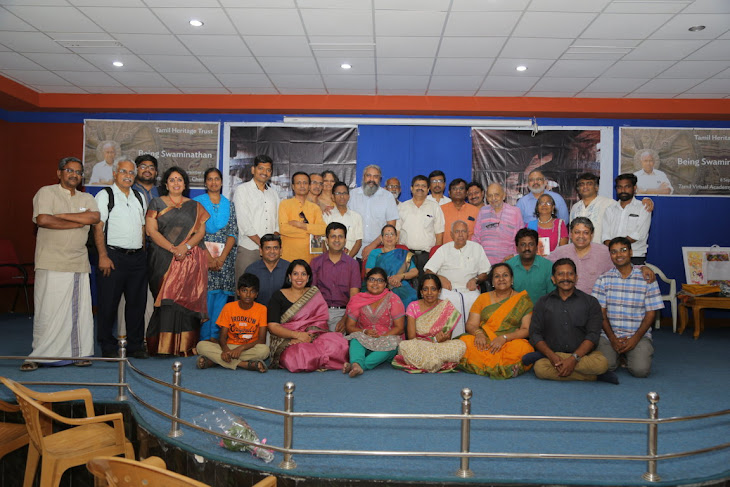 After four score and ten years, Prof. Swaminathan decided to start a new chapter in not only his life, but that of this city, Madras, which we proudly call the cultural capital of India. At the end of a lecture by Vilayanur S Ramachandran in Thyagaraya Nagar in 2008, Swaminathan proposed that like minded people come together and create a forum, to host lectures and exchange ideas about Indian heritage.
S Kannan, Annamalai, Siva Thiagarajan, and Badri Seshadri agreed, and they founded the Tamil Heritage Trust, whose first few set of programs were monthly lectures, initially hosted at the Vinobha Hall of Thakkar Bapa Vidyalaya, T. Nagar.

Badri Seshadri made it a point to video record all the lectures initially with his hand held Flip camera.  He also created the blog for THT activities and posted the videos.  It was during this time we started organizing Summer Camps for Children, Site Seminars and Pechu Kacheris.  Raga Sudha Hall, PS High School and Tattvaloka in Mylapore were also used for Pechu Kacheris and Summer Camps.

In 2016 ARKAY Ramakrishnan offered his hall in Royapetta High Road in Mylapore for monthly lectures.  It is a lovely hall with a seating capacity of about 100, air-conditioned and most importantly, we could stream videos of the lectures live on youtube.  This has been our monthly meeting place for over 4 years now.

Most of the programs are run by our volunteers.  The site seminars, pechu kacheris and other workshops are fully managed by them.  It is their extraordinary commitment, and also, generous support from public that keeps our activities going.
Newer Post Older Post Home