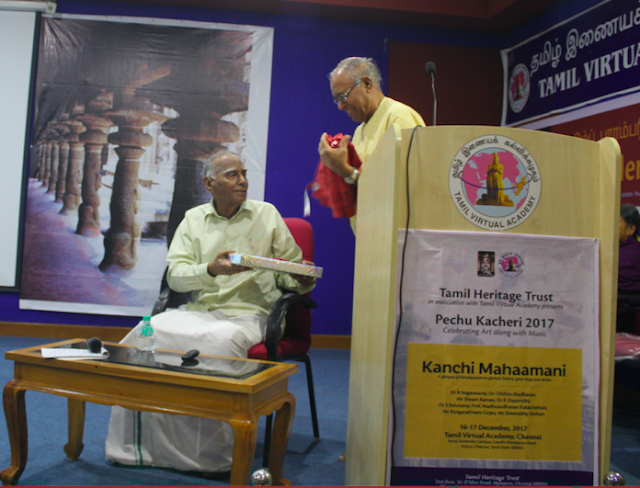 In the Tamil month Maargazhi, the second half of December, various sabhas in the city reverberate with the sound of carnatic music and several classical dance performances. It is Kacheri season, a hundred year old practice, that developed a large following, as people from all parts of the state and southern India gravitated to the growing capital city, and wanted the taste of traditional classical arts, albiet in secular settings.
Why only celebrate music and dance, was Swaminathan’s question. Why not have a celebration of other plastics arts as well, sculptures, painting, epigraphy, literature, other performing arts… in general, why not celebrate the other aspects of heritage too, for an audience teeming with leisure and hopefully curious for diversity?! Thus was born in December 2011, the Pechu Kacheri, a five day series, of lectures, lecture demonstrations, and performances, to highlight these other aspects. The inaugaral lecture by writer Jayamohan, on the nuances and relevance of Sangam literature, drew a houseful crowd, as did the subsequent talks that took a line through the various historical periods of the state.
From the second year, each Pechu Kacheri was based on a single theme. In 2012, the theme was the Paintings of India,  from prehistoric cave art, to Ajanta, Pallava and Pandya and Chola and Nayak arts. In 2013, the theme was Srirangam, a Town within a Temple. In 2014, we celebrated the various Contributions of Dr Nagaswamy, the doyen of Tamil archaeologists,and the first director of the TN Archaeology department. His first batch of students in the TN department delivered the lectures, with a grand finale on Sundaramoorthy Nayanar painting series in Tanjavur Brihadeshvara by the honoree himself. In 2016, 2017 and 2018, the themes were respectively, Mamallapuram, Kanchipuram and Chola art. In 2016, the format switched from five lectures over five days to eight or more lectures in two days, and this effectively tripled, even quadrupled the attendance. Live webcasts added considerably to the viewing audience, and there is now great awareness and appreciation of this heritage and THT’s efforts, among a significant section of the intellegentsia and connoisseurs of culture. Our 2020 Pechu Kacheri was on the Art and history of the Pandyas.

For more details on the above Pechu Kacheris, please visit: